Another winter swarm! I caught a little swarm in December and now an early spring swarm on January 18. It’s kind of unusual behavior, as most bees only swarm in spring or when resources are plenty.

“Swarming” is how bees reproduce. A successful colony has a goal of not just making more bees but of literally colonizing the area by casting off swarms and spreading their genes by way of making a new hive nearby.

First, a strong hives decides they have enough resources and start to raise new queens. As they do so, the original queen decides to pack her bags and take half the hive with her. “WHO’S COMING WITH ME?!” she yells as she flies out the door with a huge cloud of attendants – if you’ve seen it you’ll never forget it.

The original hive then produces a bunch of queens. The first to emerge chirps to her sisters who chirp back, like a little game of “Marco Polo” and when they respond she spears them with her stinger and kills them. Hey sistah! The surviving queen then flies off to mate and returns to the hive with enough sperm and eggs in her to churn out puppies for a few years.

The old queen and her retinue typically don’t go too far, though, and will hang on a nearby bush, branch, or structure – sometimes even make a small pile on the ground. This is called a “bivouac” which military folks will recognize as “sleeping outside in an impromptu fashion.”

This cluster of bees or “bivouac” (see the pic below) will hang there for as little as a few hours or as long as a few days as they send scouts out to find a nice dry cavity the new colony can call home. 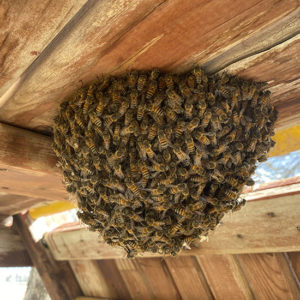 And while they’re hanging there it’s a perfect opportunity for a beekeeper to capture them – a pretty simple procedure really. The bees are looking for a good home and if I can offer that to them in the way of an inviting bee box with some drawn-out wax comb and even a little nectar the bees are inclined to come along willingly.

I first tried to hive up these bees mid-day and they took to the box readily, but there were still loads of flying bees so I left the box there until evening when I’d planned to whisk them away once they’d all gone in the box to stay warm.

Unfortunately, I returned only to see the bees had moved out of the box and made a new bivouac near their original spot – a backyard jungle gym in a residential neighborhood in New Braunfels.

Swarms are typically not aggressive, as they don’t have anything to defend like when in an established hive full of honey and resources. But when I approached this bivouac the second time they were a little feisty — probably because it was cooling down in the evening and they didn’t want to be disturbed. A few bees nailed me in the face for my trouble — it’s just part of the job!

I looked for the queen and was ready with a small queen clip to grab her, but my poor eyesight and lack of patience had me just dump them into the box. The bees moved in en masse and took right to the box. Although I didn’t see the queen, I am 99-percent sure I got her just judging by the bees’ behavior.

I love when the bees lift their tails and fan their wings at the hive entrance – it’s their “come-hither call” as they spread pheromones to the outliers inviting them to come in.

Once all (or near all) of the bees make their way inside the box I close the entrance with paper towel, secure the hive lid with a ratchet strap, and whisk the bees away in the back of the bee mobile to a bee yard nearby.

Because these bees are of unknown “feral” genetics and Central Texas is deep in the heart of Africanized bee country, I need to keep the hive in a rural bee yard far away from people until they start building up in spring and just see how they behave.

If the bees bum-rush me and cover the front of my veil when I open the box in a few weeks, and if they don’t respond at all to the calming smoke from my smoker, I’ll likely requeen the colony with a queen of more gentle disposition I purchase from an apiary supply store. The hive will then take on the characteristics of the new queen after a month or so as she raises her kinder, gentler offspring.

Once the hive is healthy but not too feisty I can move the colony to one of my other bee yards.

The process of catching swarms is not only magical and a total blast, it’s also a great way to grow colony numbers. And as we come into this busy season for bees, check back often for more swarm and bee removal videos and updates. 2021 might be starting off kind of wonky in the US, but nobody told the bees! 🙂

A short video of another swarm capture mid-December 2020