Nice article in the recent Community Impact Newspaper. Click HERE to read on their site. 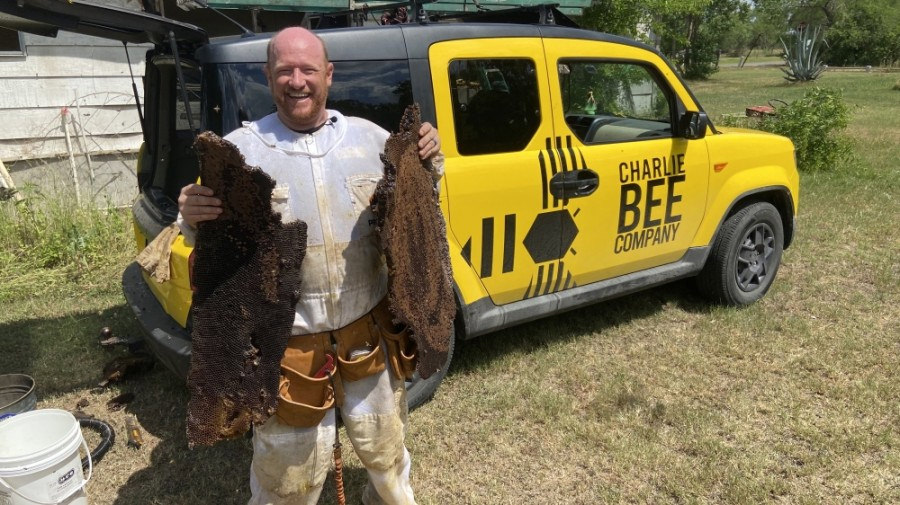 When Charlie Agar got his first hive of bees in 2013, he said he could not have imagined that seven years later he would be performing hive removals, harvesting honey and teaching others about the insect’s role in agriculture.

Originally from Massachusetts, Agar spent much of his 20s working as a freelance travel writer before moving to New Braunfels in 2009. He and his then-wife spent two years in Texas before moving to Idaho for work—a move that would prove to define much of the rest of his life up to this point.While in Idaho, Agar said he attended a beekeeping lecture out of curiosity, never intending to try it himself.

“I was instantly fascinated, bought all this stuff and got into it, and then opportunities presented themselves,” Agar said, referring mainly to the market for professional beehive removals at residential properties.

Agar had a successful first bee season in Idaho in 2013 but decided to move back to New Braunfels in 2014 after a divorce. There he devoted more time to his company, FrontRow Multimedia, but still kept up with and continued to learn about beekeeping.

After attempting a bee removal for a friend, Agar wanted to better understand the process and joined the San Marcos Area Bee Wranglers, where he met his mentor and future business partner, Alfred “Al” Friedle.

“[Al’s] just a wealth of knowledge and a very intuitive beekeeper,” Agar said. “The cool thing about beekeepers, in general, is they’re usually very open to share what they know, and they like to talk about bees.”

George Thomas, a friend of Agar, soon joined their team, and the men began working together to remove bees and relocate them to ranch apiaries.“The three of us collaboratively remove bees all under the business name Charlie Bee Co.,” Agar said. “I get to help people with their bees, but sometimes, if folks want to take the time, I can kind of guide them a little bit into the truth about what bees are all about.”

According to Agar, the team’s work caught the eye of Ashley Davison, owner of Iniosante Studios in New Braunfels, and the two collaborated to produce a show titled “Charlie Bee Co.”

The show, which airs on the Austin PBS affiliate, has received acclaim at several film festivals and aims to teach viewers about the importance of bees.

“I don’t tire of learning new things, and the bees always teach me something new every time I go out to the yard,” Agar said. “You have to make business decisions as a beekeeper, but at the end of the day it has to be driven by passion for bees.”

What’s the buzz about bees?

According to the U.S. Department of Agriculture, pollinators such as honeybees are responsible for one in every three bites of food we take and play a critical role in the economy and environment.

Over 700 species of bees are native to Texas.